Learn how to get insights into workplace utilization with a vote of your team's feet.

The urban exodus report — planning for the new workplace

The urban exodus report — planning for the new workplace

Some reports claim the pandemic spawned a widespread urban exodus. If true, this would have significant implications for the future of the workplace.

Is there still a need for centralized and expensive downtown office buildings? Should companies open hubs in smaller cities or suburbs?

We analyzed and compiled data from Pew Research, Brookings, Zillow, Apartment List, and three national moving companies to determine if reports of the death of “the city” were greatly exaggerated.

What you’ll learn in this article:

Roughly one in five Americans either moved because of COVID-19 or know someone who has (1).

28% of those who moved because of COVID did so because they could now work from anywhere (2).

Some data shows 70% more people moved out of NYC in 2020 than moved in. But that number is misleading.

northAmerican (3), United Van Lines (4), and HireAHelper all report that New York City experienced the largest outbound moves (roughly 70% more people moving out than moving in). But Apartment List (5) data shows something different. 12% more New Yorkers searched for apartments within the city in Q2 2020 than in Q1, while out-of-city, out-of-metro, and out-of-state searches fell.

Note: Q1 was before the pandemic hit hard, particularly in New York City.

Why the discrepancy between the various studies? The temporary closure of college campuses could play a role. Students forced to leave campus would likely move back in with their parents. They wouldn’t have to search for apartments, but they would still need a moving company.

Another interesting statistic that could impact future commercial real estate decisions: Those who left NYC were less likely to move to a lower-density city in Q2. It seems even if you take the folks out of "The City," you can't take the city out of the folks.

But not every urban dweller was eager to stay in high-density areas ...

13% of folks left Boston for a less dense city

When you think of potential sites for a mass exodus, you likely think of NYC, Los Angeles, and San Francisco. But Apartment List data shows Boston is on trend for a pending exodus.

20% fewer Bostonians searched for apartments within the city in Q2 2020 than in Q1 (San Francisco had zero change). Many people moving from Boston chose to go to a new metro area (including out of state).

Both Boston and NYC are expensive to live in and experience harsh winters.

But Boston living is different from NYC living. More Bostonians than New Yorkers own a car. New York’s public transpiration system runs 24-hours a day. Some people would argue you could get everything you need in life — including worldly culture experiences — without ever leaving Manhattan.

That's not the case with Boston. In other words, it’s easier for a Bostonian to consider relocating to a smaller city than a New Yorker. It's less drastic a change.

And since more people can work from anywhere, it seems many Bostonians are choosing to make a change.

We wanted to look beyond the cities to understand the motives behind moves in 2020.

There were some slight variances in the data we analyzed. But overall, Idaho, Arizona, Tennessee, South Carolina, North Carolina, Florida, and Texas enjoyed the country's most inbound moves.

Warm weather is a commonality among some of these states, but the evidence didn’t suggest sunshine being the primary reason for relocation.

The map below, courtesy of Business Insider (6), illustrates the top income tax rate of every state:

States with little to no income tax rate (Texas, Florida, Tennessee, and Colorado) saw more people move in than move out in 2020.

California, New York, and New Jersey have among the highest income tax rates in the country. They also topped the list of most outbound moves of the surveys we analyzed.

While nice weather is a perk, it’s not a necessity. That explains Idaho.

Idaho is the fastest-growing state in the country.

Idaho has a 6.93 income tax rate and cold winters — yet it saw a significant population increase.

HireAHelper, United Van Lines, and northAmerican all cited Idaho as the top destination for movers in 2020. And while Idaho has seen a rise in population over the last several years, the pandemic inspired people to move there in droves.

Money and geography are the likely reasons why.

Despite its state income tax, the cost of living in Idaho is 7.8 percent lower than the national average (7). While it’s not the only state with a lower-than-average cost of living, it is among the least expensive Western states to live in.

Western states have, over recent years, seen more inbound moves than outbound moves. Only California has consistently ranked in northAmerican’s top 10 for outbound moves since 2015 (high cost of living combined with a lack of affordable housing in some cities is a reason for California’s bleak outlook).

Most Western states have seen a steady growth in population.

Idaho's massive population increase since the pandemic is likely because the Gem State checks off most boxes. It's a Western state, with plenty of space and a low cost of living.

It also has a large urban center (Boise) ...

People are fleeing cities (for cities)

Neither Wyoming nor South Dakota has a state income tax. Each state's cost of living is lower than the national average. And like Idaho, they have plenty of wide-open spaces.

Yet, they're not experiencing the type of population growth as other similar regions.

It’s likely because of a lack of a major urban center.

For context, let's revisit Idaho. HireAHelper data shows that four times more people moved into Boise in 2020 than left it. It's safe to assume, then, that many people moving into Idaho aren't living off the grid. They're not even moving to the suburbs. They're moving into a city with a population of 240,000+.

U.S. Census data analyzed by Brookings (8) shows this type of domestic migration from major metro areas (metropolitan areas with populations exceeding one million) to smaller metro areas has been happening for several years.

And while the chart above shows non-metropolitan areas seeing a population increase over the last several years, the pandemic has not inspired a monumental shift toward the suburban lifestyle.

The takeaway: People have been leaving some cities long before COVID

Most major U.S. cities saw a boom in population growth in the first half of the 2000s. But over the last few years, they’ve seen a steady decline in growth.

This is a far more concerning trend than if an urban exodus was COVID-motivated. COVID-related moves could very well be temporary. Someone moves closer to their family, then grows tired of suburban life and moves back.

This steady decline from 2015 through the pandemic hints at something larger: cost of living and quality of life.

This is evident in the regional variation in migration trends (beyond just 2020).

The majority of moves that have taken place in 2020 and the years preceding it are to the South and West. While not every state with population increases (particularly in the West) touts the best weather or low cost of living, they offer something the Northeast does not — space.

Even before the pandemic, people appeared to grow tired of the congested roads, dense cities, and lack of open spaces in the east.

One long-term effect of the pandemic may be that an increased desire for space will move people away from dense, cold, and expensive cities like Boston and Chicago. The good news for businesses looking to establish a presence near top talent is that the evidence suggests people haven't abandoned cities.

But there is a growing interest to relocate outside major metropolitan areas to cities that offer similar amenities with less density.

Managing the spokes of your hub-and-spoke workplace 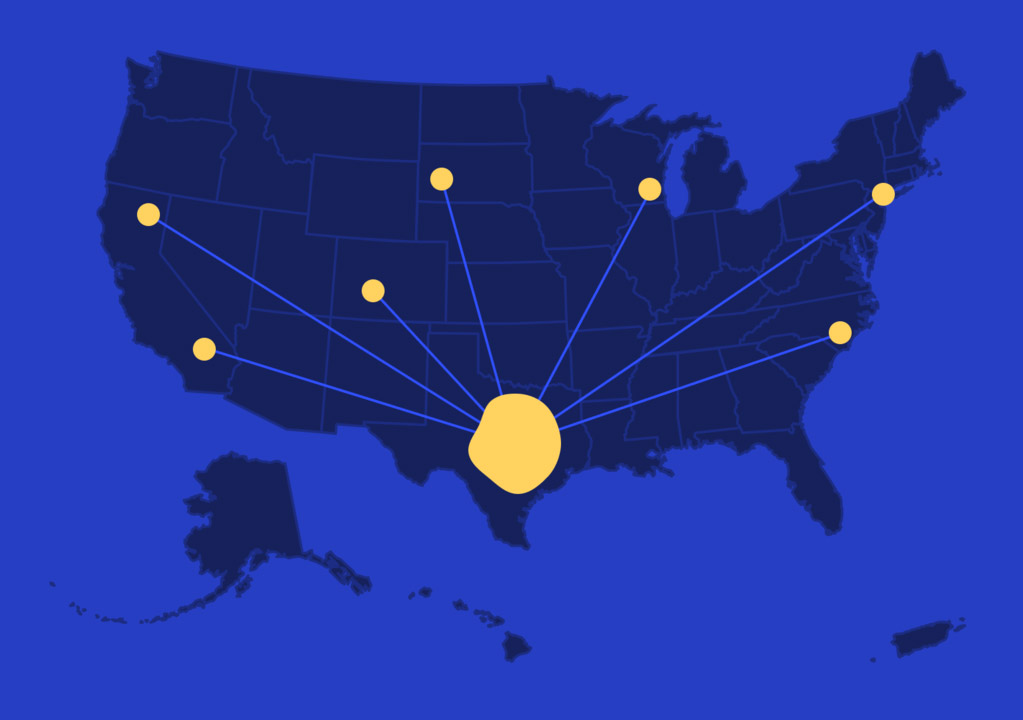